I have had an urge to have Laser Hair removal for the last 3 years but due to few different reasons it just wasn’t possible at the time. Oh can you only imagine the sheer bliss of not having to worry about shaving or waxing! Finally a month ago, I made the call to a local salon in my home town of Houston called Clearstone Laser Hair Removal to enquire about the treatment, type of machine that is used and importantly how much I was going to have to part with.

The salon I am attending has the Medical Grade Laser which is the best machine from what I have researched.

Firstly, I had to go into the salon to be patch tested. My therapist Sarah took me into the treatment room. The room was quite cool and my therapist told me how to prepare. 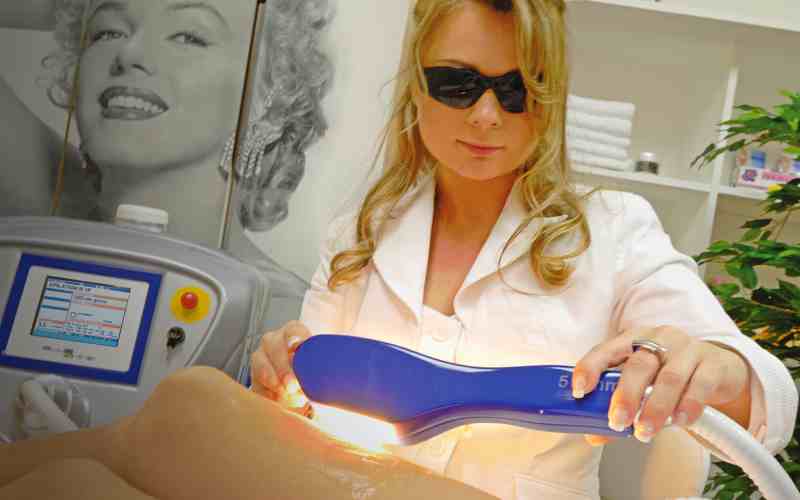 Not actual photo, just for the demo purpose only.

The areas that I wanted done was full leg, bikini and underarm and upper lip. Sarah checked my hair in all these areas and it was decided that I just go for half leg due to the hairs on upper leg not being suitable as they were very fluffy and light and hair removal would not be permanent.

Did I really want to have any unnecessary pain, hell no!!

Bikini area and underarm were both straightforward and I could get done to my requirement. Again my upper lip the hairs were to fair that there would be no benefit.

Patch test was fine so all I had to do was prepare the 3 areas 24 hours beforehand.

The day finally arrived and I was nervous of the not knowing what or if I would experience any pain or not plus the excitement that I had finally got to the day of starting laser. It is a lot of money in one lump to be paying out and I was worried that what if I didn’t keep up with it or if it didn’t suit me or in reality what if it was so painful it put me off.

But in Clearstone Laser Hair Removal you can pay in one full lump sum or you can pay as you go or as I opted to pay half of it on my first treatment. To be honest I would recommend either paying it in full or else as I am doing it – in two payments as at least this way you will keep it up. It was great being able to pay for it in 2 instalments as money is tight for everyone and at least this way you have a few months to build up the next payment.

Anyway back to the actual treatment

I went into the treatment room and got ready. They supply disposable underwear and I recommend you use these as it is so much easier to move them about as they are a lot looser. Good tip as well, if getting bikini done, don’t wear dark coloured underwear (if you are wearing your own underwear that is) as it absorbs the laser and takes it away from penetrating the actual hair shaft and root causing it not to take effect and you might as well throw your money down the toilet.

Oh my I feel like I am rambling away now. Back to the treatment – AGAIN… Firstly legs were done and I found them fine no discomfort. As the laser is done there is a cool spray before each flash which takes the pain away or well reduces it.

Next area was the bikini. Now I would be lying if I said I wasn’t completely crapping it. I think I must of texted my mates throughout the entire treatment as I was so worked up and I needed to keep my mind occupied.

To be honest majority of the bikini was fine but the few areas that would have really coarse deep rooted hair well lets just say my language was quite colourful. I have been through labour twice and I swear to god you would think I would have a good pain threshold. Sarah had told me to tell her if I needed her to stop at any point during treatment.

I informed Sarah even if I begged her or bribed her DO NOT STOP or I would be there for the day!! Finally underarms was fine not a bother. Areas were then coated with some aloe vera to soothe the treated areas.

Post treatment I couldn’t begin exfoliating until day 4. I was like a child waiting on Santa Claus. Anyone who knows me knows I have zero patience and want everything now… I was dying to get exfoliating to see if any hairs shed. Well I had a long wait as it was probably day 14 before they began shedding. I exfoliated every 1-2 days as certain areas you see pepper spots so by regularly exfoliating they will eventually clear. (Anyway, if you’re into DIY hair removal, check out this post!)

Today is day 22 post first treatment and OMG my underarms still have no hair (now I always was light in hair growth in that area) and my bikini is just amazing so far. There is one spot probably about an inch circle that has had some hair growth but other than that I am pretty much smooth.

I haven’t seen much difference in my legs to be honest. So far, after one appointment I am really glad I have started getting laser hair removal. I hope I keep seeing these results and at the end I do get the results I was expecting. I will follow on from this post after my next appointment at the end of November.